King’s Day 2015 – the bricks and mortar version of eBay 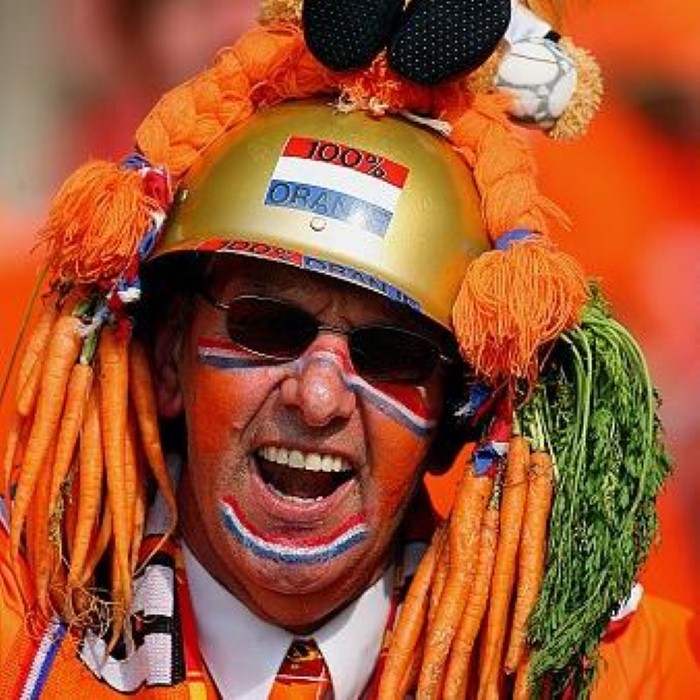 Traditionally, the Dutch know themselves to be either cunning traders or preachers with pointed fingers, yet on King’s Day all fingers go. It seems that literally everybody will engage in the activity of commerce at the most basic level when knickknacks that have been saved up for the preceding 12 months are displayed on blankets or makeshift market stalls, mostly tended by kids who get to pocket the money.

Clad in orange outfits, eating food that has been dyed orange, donning orange umbrellas, the entire country turns into a massive orange-coloured car boot to celebrate the new monarch’s birthday. I kid you not. You can pick up extremely good bargains while subjecting yourself to anecdotal (mis)information about the items you are either purchasing or only eyeing up. Expect to indulge in a spot of haggling as that’s part of the routine on the King’s Day vrijmarkt (free market). Everybody does it and the sport is to come away the winner.

And no, the electrifying buzz does not emerge because the party is illicit as on King’s Day, everyone in the Netherlands has the right to buy or sell second-hand items on the streets and parks, provided they have sellotaped off their two-by-two metre spot the night before.

To the foreigner, celebrating a royal birthday this way might come across as a bit bizarre, but the tradition is not offensive in the slightest to the Dutch psyche, in which trading is firmly entrenched as a rather honourable way of making a living, owing to around two centuries of accumulating riches by trading in the Far East. The Dutch derive their word peperduur (peppery expensive) from this era. Ponder for a minute that peperduur is used to indicate something that is incredibly expensive or that costs the earth, and you will understand why everybody has a ball at the royal flea market, where treasures are parted with for mere farthings. If you happen to find yourself in the posh areas, the attic clear out could land you with a designer outfit for under a fiver. You might walk away with Ray Bans for pennies, or an extremely good violin for a few bob.

The street markets, which stretch out across the city of Amsterdam, also include plenty of food stalls, and needless to say you will be able to buy beers and other booze every five steps or so. Indulging in a few drinks while hunting for bargains will seem the natural thing to do, because there’s an electrical party atmosphere everywhere, especially if the weather is good.

The overwhelming impression you will take away from this event is that everything, the entire city, will have turned orange. People dye their hair orange, and even paint or dress up their pets in orange materials, while a large percentage of the children’s faces will have been turned orange too. In case you did not know – it is the Royal Family’s colour. They are direct descendants from William of Orange, who was betrothed to Mary Stuart.
On a practical note – it is best to arrive at least one day before the event and organise to meet up with others the night before or even earlier, as on the day itself, the entire city will have become a pedestrianised zone filled with market stalls and millions of people. In case you are unfortunate and need to get to another part of town to meet up with others, try to estimate whether or not you have a chance to actually succeed and if your instincts tell you no, just forget about it and enjoy yourself.

The gridlock traffic is enormously fun and there is entertainment everywhere. In case you really need to get to somewhere, you might try taking a boat. On King’s Day, there will be many boats on the Amsterdam canals. In case even the boats are gridlocked, try swimming. You are up against an estimated three million other people on King’s  Day, in a city that normally has a population of around 750,000, so most of the time there is no point in planning to meet up with friends who are further than 300 yards away once the day has started – you simply won’t get to them until the party is over and done with.

Tip: Artis zoo opens for young stall holders this year. By way of exception the zoo allows a limited number of kids to hold a free market in front of the flamingos and spoonbills (!) from 8am.

Another, less central (and therefore less congested) free market venue is the family friendly Bredeweg Festival (free) in the east part of Amsterdam. This bustling street party features not only a street market, but a fairground, theatre performances and live concerts and starts on the evening of April 26th with an ‘opera on the street’ performance.

Bredeweg is quite representative of all King’s Day events. Expect live music of all styles spread over a series of stages, food stalls, family fun, including rides, storytellers, face painters, craft workshops and performance artists everywhere.

Late at night, both on 26th and 27th April, club venues tend to organise cool events, too. Koningsnacht (King’s Night) is on either date; make sure you don’t get confused and check the iAmsterdam website for details of the many festivals, dance events and concerts. One highlight is the techno dance event at Warehouse Elementenstraat, with a line-up including Scalameriya, AnD and Francois X. The event starts at 10pm and finishes at 7am the following morning.

The Red Light District, which is situated around the Zeedijk (near Centraal Station) and the area around the Reguliersdwarsstraat, as well as portions of the Amstel River are going to be turned into huge gay street parties.

King’s Day has a long but still traceable history. It all started with the current king’s great-grandmother, Queen Wilhelmina’s birthday on 31st August 1885. When Wilhelmina’s daughter (Queen Juliana) succeeded her in 1949, the day was changed to 30th April in accordance with the new Queen’s birthday. Queen Beatrix opted to retain the day in honour of her mother (and because weather conditions on her own January birthday would not be suitable) but with the Netherland’s latest monarch, King Willem Alexander, King’s Day will officially be celebrated on 27th April (the king’s birthday).

Amsterdam celebrated King’s Day for the first time in 2014, after the inauguration of King Willem-Alexander the year before on 30th April, the day the previous Dutch monarch’s birthday was celebrated. Oddly enough, three days later various international visitors showed up, dressed in orange and sporting big balloons, wondering where the party was. A press photographer took a picture of the puzzled tourists which went viral in no time – don’t let it be  you this year!

You might wonder if you will be able to spot the Dutch royal family and it’s very likely you won’t unless you are prepared to travel, as their 2015 schedule does not include Amsterdam.