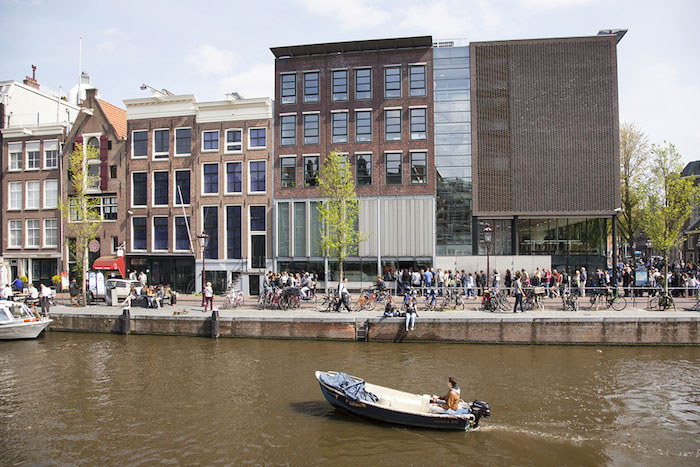 Most people visiting Amsterdam pay a visit to the Anne Frank House, so it should be no wonder that this museum continues to top the bill of most popular tourist activities in Amsterdam. But it appears that Anne Frank’s fame is ever growing. Last year, the Anne Frank House drew another record number of visitors.

A total of 1,227,462 people went to see the secret annex in 2014. By my calculations this averages out at 3,362 people per day. And with average opening times of ten hours a day, seven days a week, this means that every hour, some 336 people pass through the narrow space! The 2014 new record topped the 2013 number of visitors by 32,006. During the past five years, every year saw a new all time high.

The majority of visitors come from abroad. Last year only 140,000 visitors of the 1.2 million were Dutch. Given these crazy numbers of people, the international traveling exhibition ‘Anne Frank – a history for today’ probably ought to rank among Amsterdam’s more innovative contemporary logistics solutions. Once again, the numbers speak volumes. This exhibition reached no less than half a million of young visitors – that’s not even counting people over 40 years of age! It was shown in more than 30 countries last year.

“It is impressive that so many people from all parts of the world visit this place and learn about our history,” said Ronald Leopold the managing director of the Anne Frank Foundation, commenting on the new records in Het Parool, the Amsterdam-headquartered national daily newspaper.

Online numbers are also growing – the Anne Frank Foundation reported recently that its website had over 5,200,000 unique visitors last year. On Facebook, its visitors rose to 729,000.

The book has been transformed from mere text into a fully immersive user experience by means of interactive, multimedia embedded content including video, which connects the reader with real objects in the annex and in Amsterdam. Also memorable last year was the inauguration of a statue of Anne Frank in Buenos Aires. It is a replica of the monument in Merwedeplein in Amsterdam, where Anne lived before going into hiding in the secret annex in 1042. The art work was created originally in 2005 by Dutch artist Jet Schepp, who attended the inauguration of the monument, which has been placed on Plazoleta Reina de Holanda (Queen of Holland square). The monument was a communal initiative of the Argentine Ministry of Education, the Centro Ana Frank Argentina and the Dutch embassy. It was revealed on the International Day for Human Rights.

In case you wish to dodge the queues at the Anne Frank House, read the guide I wrote recently on how to be savvy when planning a visit to this museum, and be sure to gain access in less than the obligatory two hours.