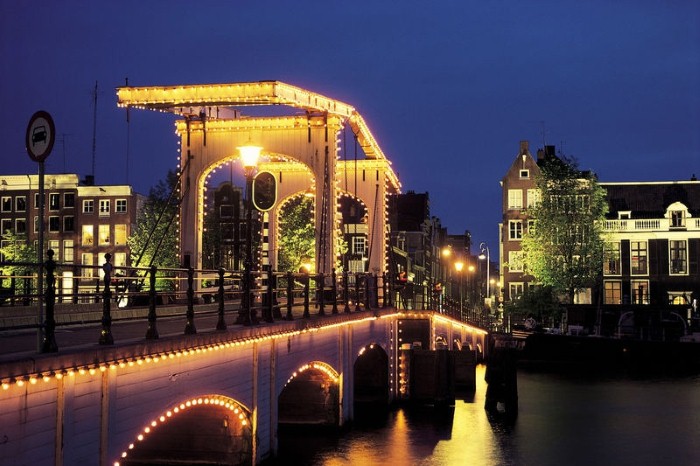 Amsterdam has 165 canals which weave together a string of waterways with a length of over 100 km. Needless to say that there is a huge number of bridges to facilitate modern day cyclists, pedestrians and cars crossing from bank to bank. In total there are 1,281 bridges in Amsterdam, 500 of which you can find in the old city centre. Did you know that is even more bridges than there are in Venice, which only has 400 of them?

The most spectacular bridges can be found in the historic city centre where they grace the canals. You can go on a guided walking tour of these but chances are that you won’t hear any stories of which there aren’t millions of versions available online. The various tales about most of the historic bridges are as widespread as they are inaccurate.

In case you want some facts, why not venture out to the spot from where it is said you can see fifteen bridges all at once? Then you only have yourself to blame in case you only count thirteen…

15-bridge vantage point
It takes a bit of maneuvering but it can be done. Simply head out to the bridge which forms the corner between ‘Reguliersgracht’ and ‘Herengracht’ and check the numbers on the doors lining the gracht. Are they odd or even? Opt for the odd numbered side of the Herengracht, position yourself on the bridge with your back to the Thorbeckeplein, look straight ahead and begin counting; there are six arched bridges in a row, when you are stood like this. Then look to the left and unless your eyesight is failing, you should be able to count six more bridges across the Herengracht canal. The last three bridges to count are the two to your right and of course the one you are standing on. If this thrills you, make sure you return during the night, because it happens to be one of the most romantic spots in Amsterdam. All the bridges will be lit up and the light is reflected by the water in spectacular ways.

Skinny Bridge
Once you have passed the 15-bridge challenge, you are ready to start looking out for Amsterdam’s most famous bridge, the Skinny Bridge (Magere Brug). This bridge’s name has demonic connotations, as in the Dutch language the Devil is referred to as Magere Hein. Not many tourists realise this as they marvel at the alluring wooden structure which was rebuilt in 1934. The Dutch use the word for skinny also to refer to narrow, and when you see the bridge, you will realise that this is rather appropriate; it is too narrow to be used by cars and is only open for bikes and pedestrians. Magere Brug was originally built in 1691 in the form of a typically Dutch double drawbridge. The current design has stayed true to this design, which means that the Skinny Bridge still opens up in the middle and uses a counterweight mechanism. It opens several times daily to allow ships to pass, which some people find fun to watch.

Blauwbrug
Also try to see the Blauwbrug (Blue Bridge), which, incidentally, doesn’t reveal the slightest trace of blue paint. This bridge connects to what used to be the Jewish Quarter of Amsterdam (before WWII) and is named Blauwbrug because its predecessor, a wooden construction built in 1883, was painted blue. The Amstel river flows underneath it and the careful observer might notice that the Blauwbrug resembles many of the bridges across the Seine in Paris. The reason for that is that it was built at around the same time as many of the bridges in Paris. Before 1940, the bridge was more commonly known under its Yiddish name Bloubrik and some people will still use that word. Another quirky fact is that when Queen Beatrix was inaugurated in 1980, Blauwbrug was the focal point in the riots between thousands of squatters and riot police. Dutch youngsters still learn about this event because a novel by A.F. Th. van der Heijden entitled The Battle of the Blue Bridge is listed as mandatory
reading on the curriculum.